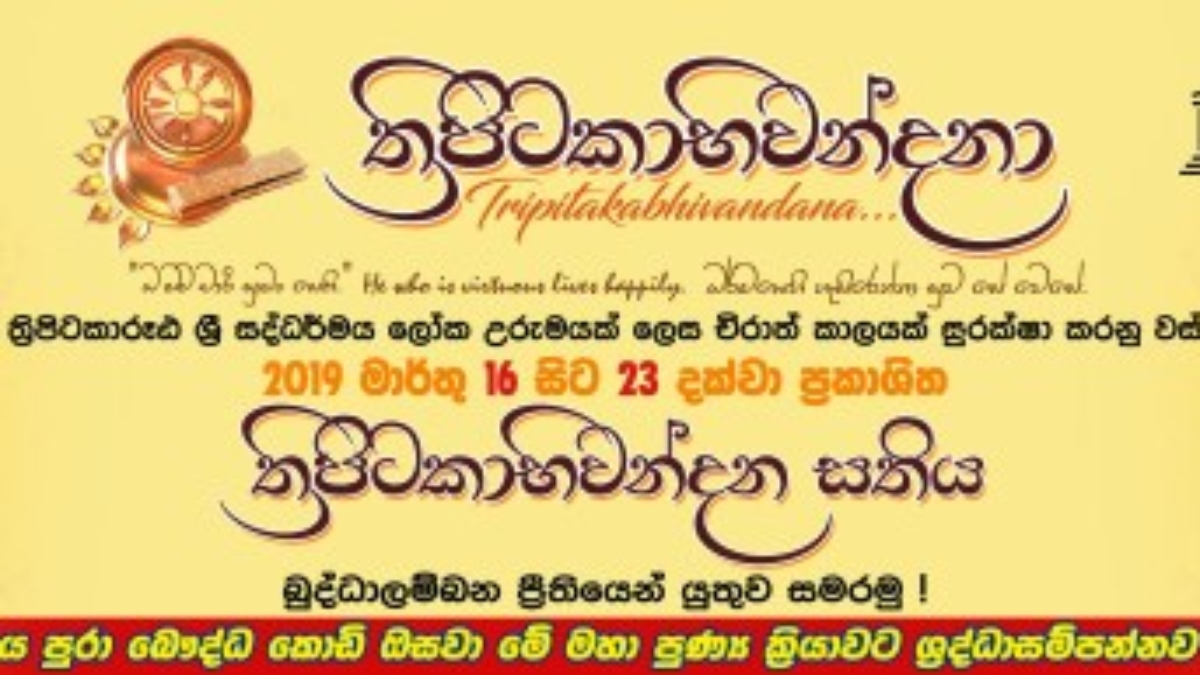 ‘Tripitakabhivandana’ Week has been declared from tomorrow (March 16) to March 23rd, to mark the occasion of initiating the process in order to declare the Theravada Tripitaka, the sacred scripture of Buddhists, as a World Heritage.

The National ceremony to announce the proposal made by Sri Lanka to the United Nations Educational, Scientific and Cultural Organization (UNESCO) to declare the Theravada Tripitaka as a World Heritage, with the assistance of all the Buddhist countries in the world, will be held under the patronage of Maha Sangha including the Maha Nayaka Theros of the Tri-Nikayas and with the participation of President Maithripala Sirisena at the  Maha Maluwa (Great Terrace) of the premises of the Temple of the Sacred Tooth Relic on March 23.

The Presidential Secretariat, Ministry of Buddha Sasana, Ministry of Housing, Construction and Cultural Affairs in collaboration with other Ministries have organized many religious programmes to mark the ‘Tripitakabhivandana’ Week and a request has made to the public to hoist the Buddhist flags in all the state institutions, private institutions, houses, vehicles and roads.

‘Tripitakabhiwandana week’ program will be conducted a Sound Offerings from 6.00 pm to 6.15 pm in the week in Island wide. Meanwhile, the Tripitakabhiwandana, along with the Sacred Relics, was organized simultaneously in several Buddhist religious places throughout the country.

On the 16th of March, the Tripitakabhiwandana Week will be held at the police divisional level based on the Pindapatha Alms giving and the various religious programs based on Sri Lankan temples abroad.

On Sunday, March 17th, a program is to be implemented to construct Sunday Damma Schools building in 226 temples selected for the children studying Dhamma education under the trees. On March 18th, Island wide, religious programs will be held and various programs will be organized based on non-governmental organizations on Tuesday, 19th March.

On March 20th, the Poya Day, the ‘Janapathi Sadaham Yaththra’ program will be conducted and on the same day arrangements will be made to inform the public about the Tripitaka Dharma offering at Temples Island wide.

Thursday, March 21st, Presidential Secretariat and all Governor’s Offices jointly organise alms giving programs. Various religious programs including alms giving by all state institutions will be held on Friday, March 22nd. On the 23rd of March, the national festival will take place at the historical Dalada Maligawa, concluding the Tripitakabhiwandana week.