it has been recognized that Central Europe is an economically important region for Sri Lanka. The potential of Central Europe remains largely untapped. This region is much open for business and in particular attractive for long-term growth prospects. Although Sri Lanka has a strong image in the region, our commercial engagement has been relatively limited. Sri Lanka’s total bilateral trade with Central European countries is $810 million in 2018 with its total exports to Central Europe being $ 388 million and imports 422 million. But these figures do not tell the entire story as it contains Sri Lanka’s healthy trade relations with only few of the countries like Poland and Hungary.

Recently EU has announced its Europe- Asia connectivity strategy. It is important that Sri Lanka should now look beyond the largest EU states of Western Europe and utilize the potential of cooperation I the Central European countries which complies with the uniform market rules which apply throughout the EU.

In the above context, Sri Lanka Export Development Board in cooperation with the Embassy in Poland organized an out ward trade mission to Central Europe covering Hungary and Poland. This delegation was organized parallel to the First Session of the Sri Lanka Hungary joint Commission held in Budapest.

Immediately after the Hungary program, the delegation proceeded to Poland. Poland is the largest economy in Central and Eastern Europe. Poland’s population exceed 38 million.

During this mission the Sri Lankan participants discussed with their counterparts on different options of partnerships. It was identified that the Central European market is more affordable and reachable market for Sri Lanka and the delegation was afforded with the opportunity to develop business sales leads, joint ventures, and distributorships in both countries.

Siddhalepa Exports Ltd, Director Vidyani Hettigoda stated that they received positive interests towards Ayurvedic products, hotels and franchise sectors from the counterparts they met in Poland and could establish a number of business contacts in Poland. Though Sri Lanka tourism industry braces for tough time, Polish companies specifically inquired for facilitation services for one to two weeks I Ayurvedic Health Resorts in Sri Lanka.

Further, Hettigoda mentioned “I saw a lot of possibilities in Poland to promote Ayurvedic products and would like to explore those . I developed many contacts, and is now exchanging emails, so the relationship have begun.” It is reported that in the next few months, EDB anticipates that many of these leads will develop into formal agreements, and the EDB will continue discussions with the private sector mission participants to track their individual results. 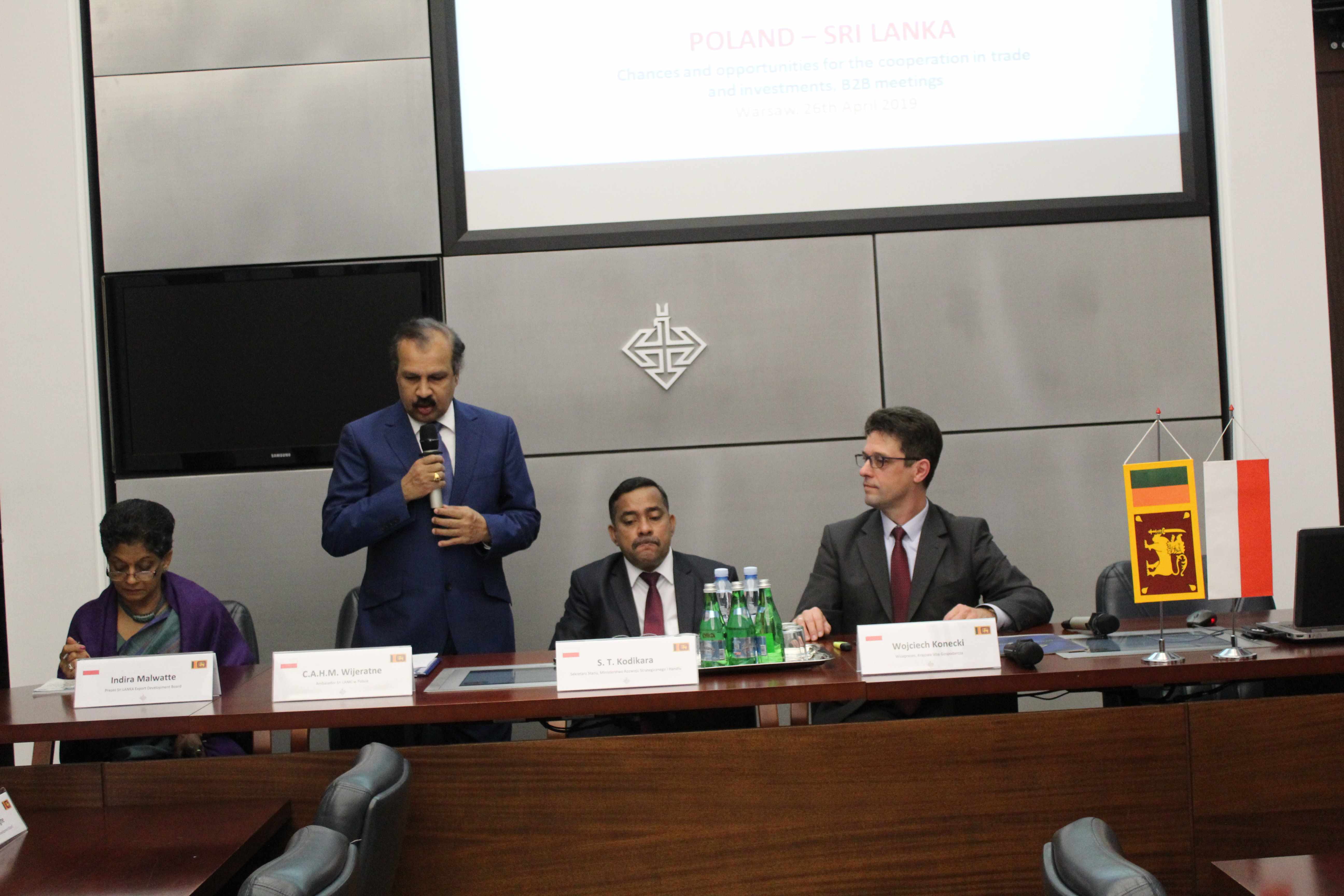 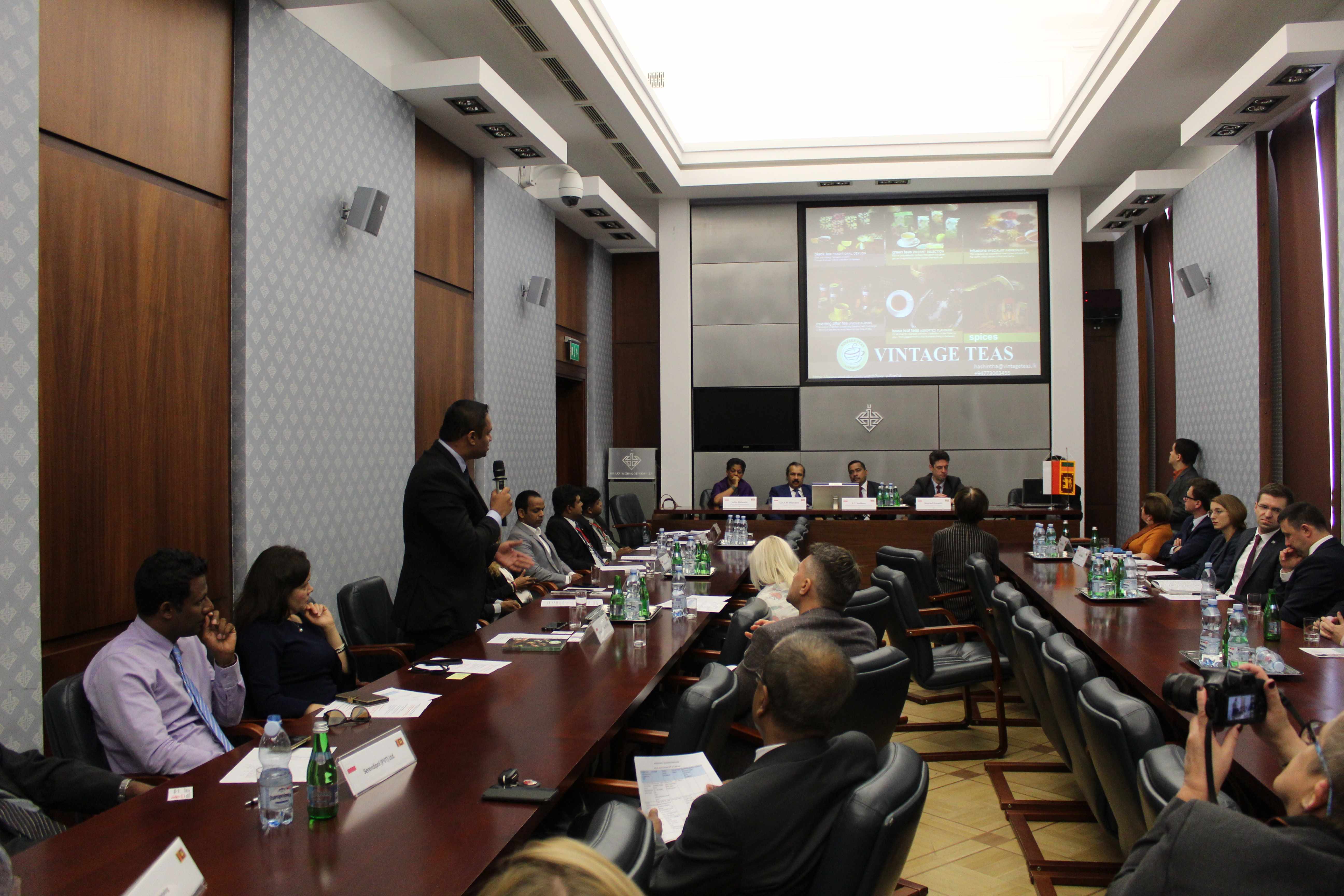 During this visit, it was identified that participation of Sri Lankan companies in the Sector of food and beverages at the World Food Poland would be beneficial to make further connections with the buyers in the Central Europe. It provides a platform to connect and conduct business with food and beverages industry operating in Eastern Europe. The next World Food will take place in March 2020 in Warsaw. Sri Lanka Export Development Board and Sri Lanka Embassy in Warsaw do encourage more participation from Sri Lanka at the forthcoming event.

During the business Forum held at the Polish Chamber of Commerce, the  representative from the LOT Polish Airline revealed that its new seasonal service between Warsaw and Colombo is among the shortest routes from Europe and adding a connection between Europe and Sri Lanka from the next winter season, which will guarantee the shortest travel to the destination from many European countries. This may lead to wider scope for greater economic cooperation with Sri Lanka and Poland for more trade as well as tourism. Tourist arrivals from Poland have risen by 7.5% to 9,836 in first nine months of this year. 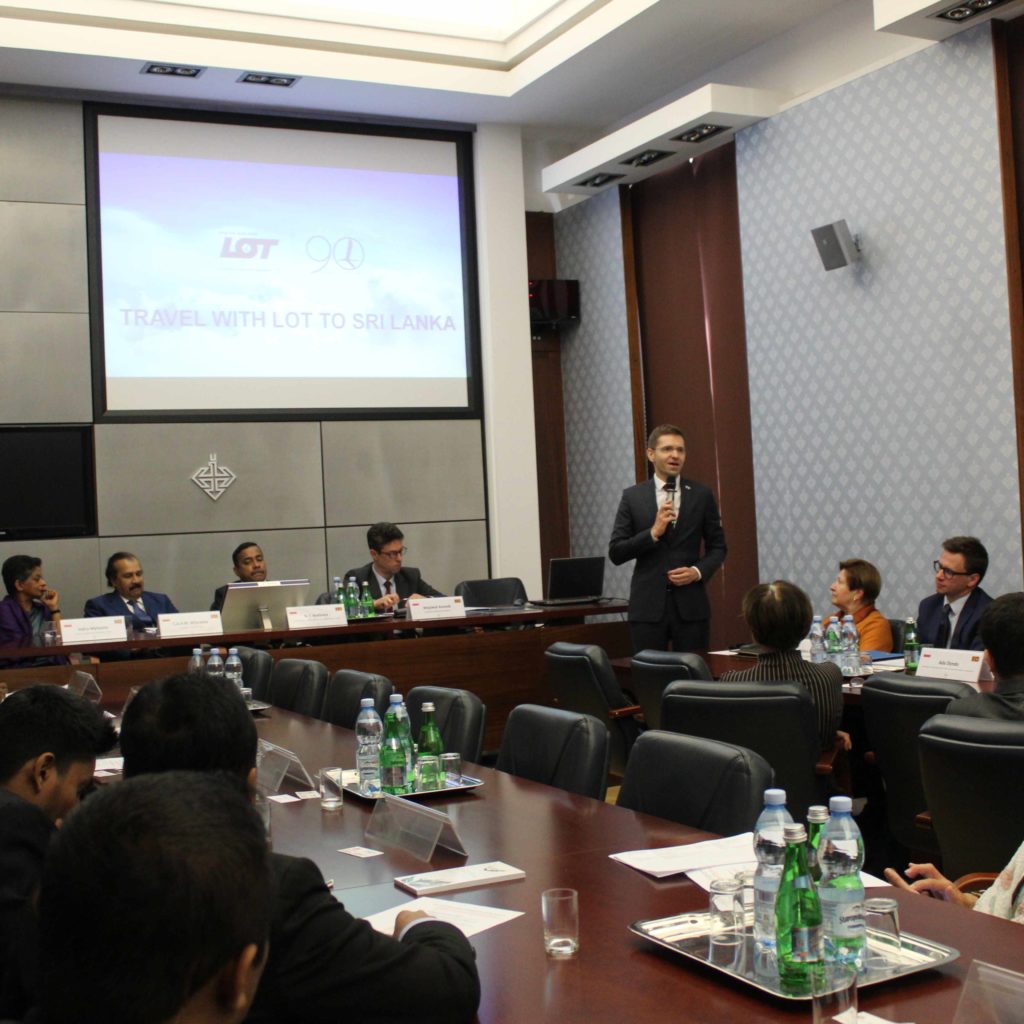 Head of the Sri Lankan Trade Delegation Meets with Mr. Lukasz Porazynski, Director for International Trade, Ministry of Entrepreneurship and Technology of Poland.

Accompanied by H.E. CAHM Wijeratne, Ambassador of Sri Lanka to Poland, and Ms. Indira Malwatte, Mr. Sisira T. Kodikara, the Secretary of Ministry of Strategic Development  & International Trade who lead the Sri Lankan Trade Delegation to Poland  met with Mr. Lukasz Porazynski, Director in charge for the International Trade in the  Ministry of   Entrepreneurship and Technology of Poland during his visit on 25th April 2019.

During the meeting, the Secretary stated that the Economic Diplomacy has become one of the most vital aspects of a Sri Lankan Foreign Policy. He said that in this context, in addition to its multilateral economic responsibilities, his Ministry coordinates bilateral trade and investment promotion activities with other countries through Sri Lanka Missions abroad.

He also inquired from the director on the mechanism of Polish government to monitor the implementation of Trade Agreements. In response to the quarry, the Director stated that the Polish Government should adhere to the guidelines set out by the EU.  However, he said that bilateral investment promotion agreements can be concluded with individual countries. He also encouraged the Government of Sri Lanka to re start the negotiation on the investment promotion and protection agreement.

Mrs. Indira Malwatte, Chairperson of Export Development Board outlined the untapped potentials of Sri Lanka and Poland Trade relations. She also requested the assistance of Department of International trade to implement the Economic Diplomacy Programme. She also said that the following sectors have been identified as most suitable for Poland for cooperation i.e. Apparel Sector, Gem and Jeweler Sector, Rubber Products Sector, & Sri Lanka Promotion under EU GSP Plus facility.

The Secretary also requested the assistance of the Department of  International trade to establish collaborative arrangement with the Agency for Research and Development in Poland. He also said that  Sri Lanka is in the process of establishing such an Agency to encourage Public and private partnership on carrying out tasks within the State policies on Science, innovation as well as Science and Technology.

The director said that his Ministry is very much in supportive of the initiatives of the Government of Sri Lanka in strengthening trade relations between both Countries. With regard to the Agency on Development and Research, He said that the Agency has supported more than 10,000 project proposals and they would like to support  Sri Lanka in its endeavor to establish such an Agency in Sri Lanka. 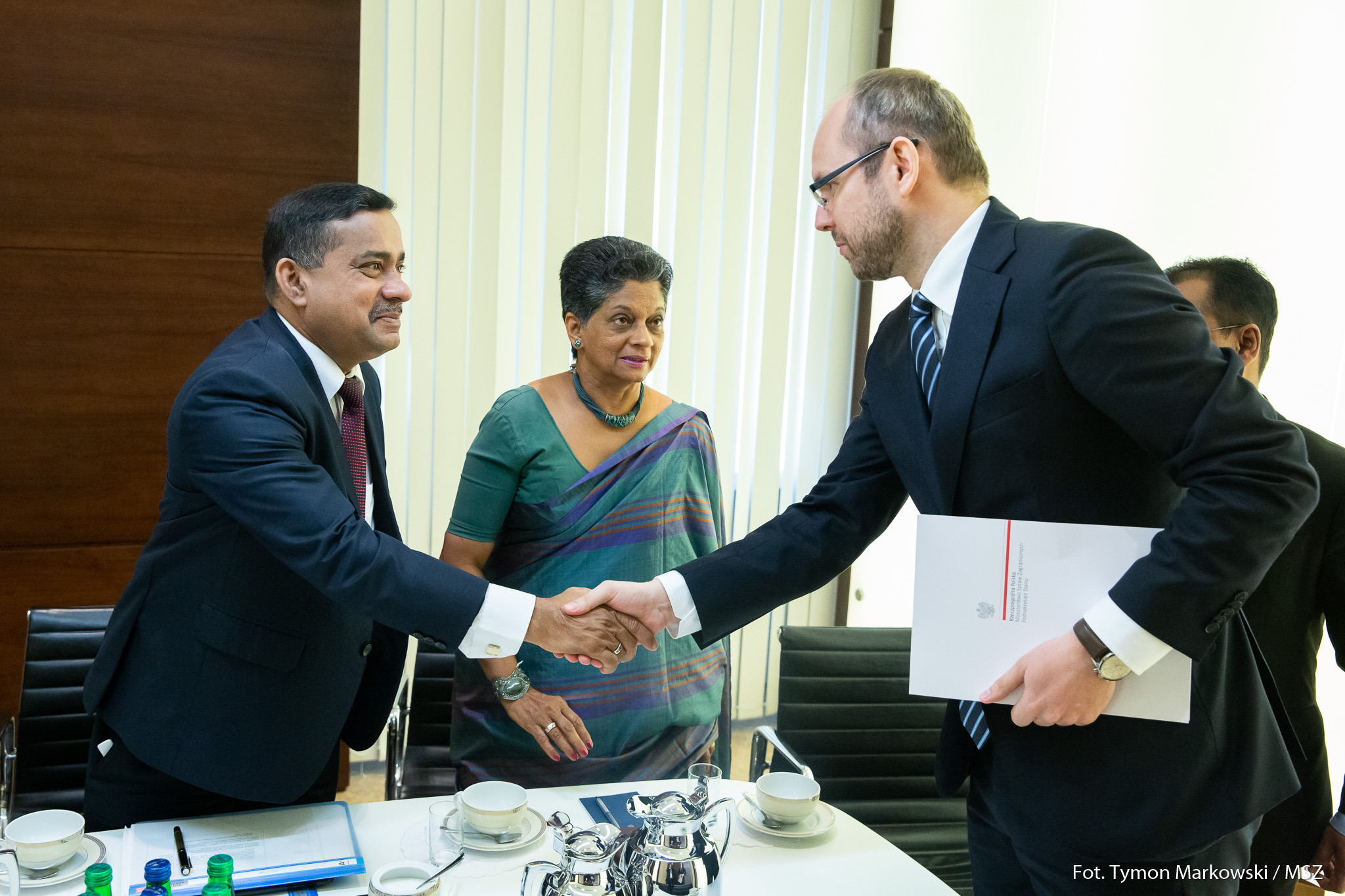 The Hon Deputy Minister welcoming the delegation conveyed the condolences of the Ministry of  Foreign Affairs to the bereaved families on Easter Sunday attacks in Sri Lanka. He also expressed his government’s solidarity with the Government of Sri Lanka in defeating terrorism.

The Secretary stating the purpose of the visit stressed the importance of having strong trade relations with Central and Eastern European countries. He said that Sri Lanka and Poland have much to offer to each other. There are many complementarities of interests and mutual benefits and dependencies. Central European countries have stable macro- economic environment, highly educated yet affordable workforce, favourable business environment and strategic location.

The Secretary also inquired the status of the projects proposals made by Sri Lanka under the Polish Development Assistance Programme.

In response Hon Deputy Minister while agreeing with the Secretary stated that there is a hugh potential in developing trade relations between both countries. His government stand ready to develop a strategy in strengthening these relations further.

With regard to the project proposals under the Polish Development Assistance Programme, he said that the Polish Government has made counter proposals to the Government of Sri Lanka for which a response is awaited. 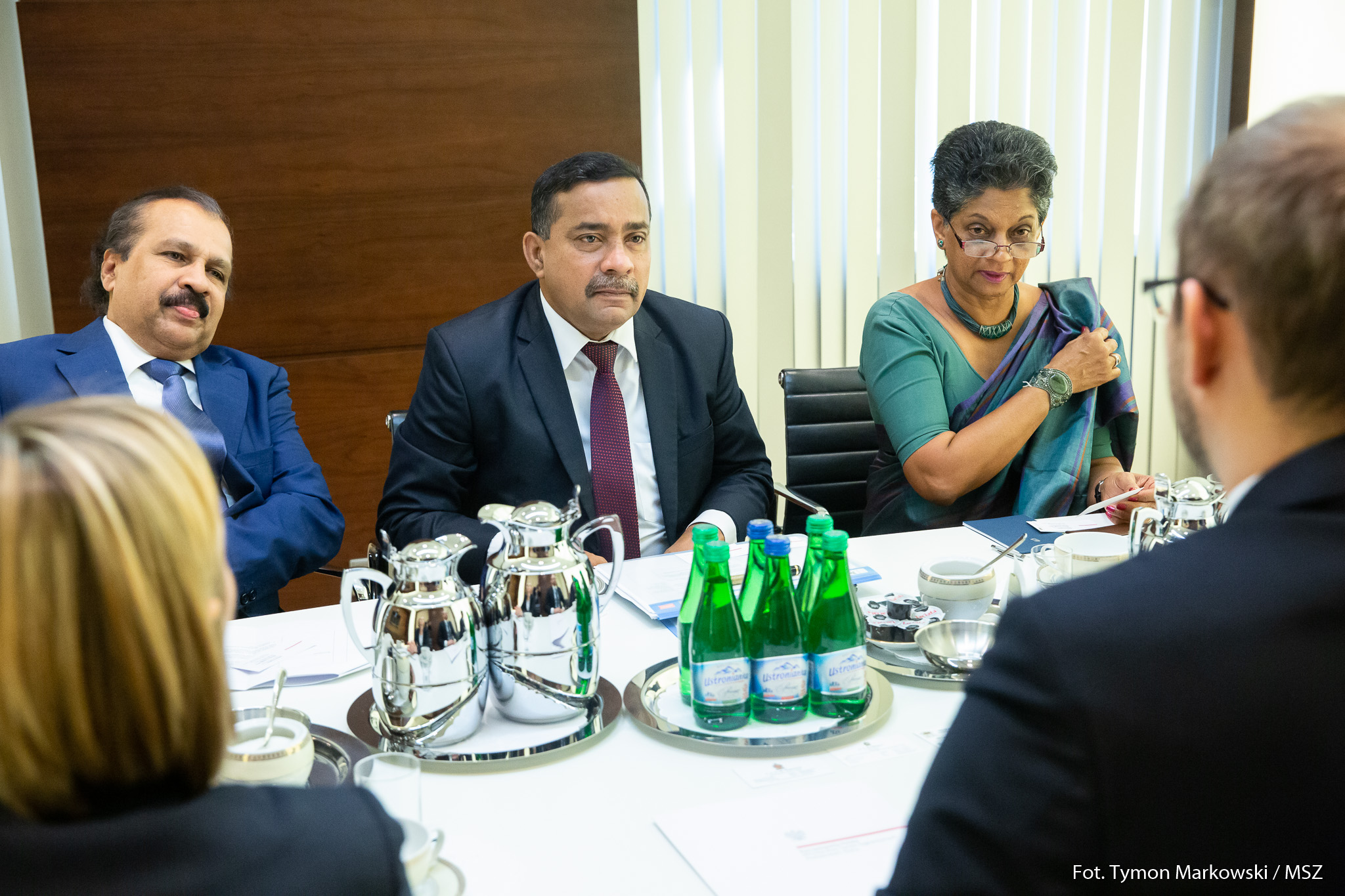 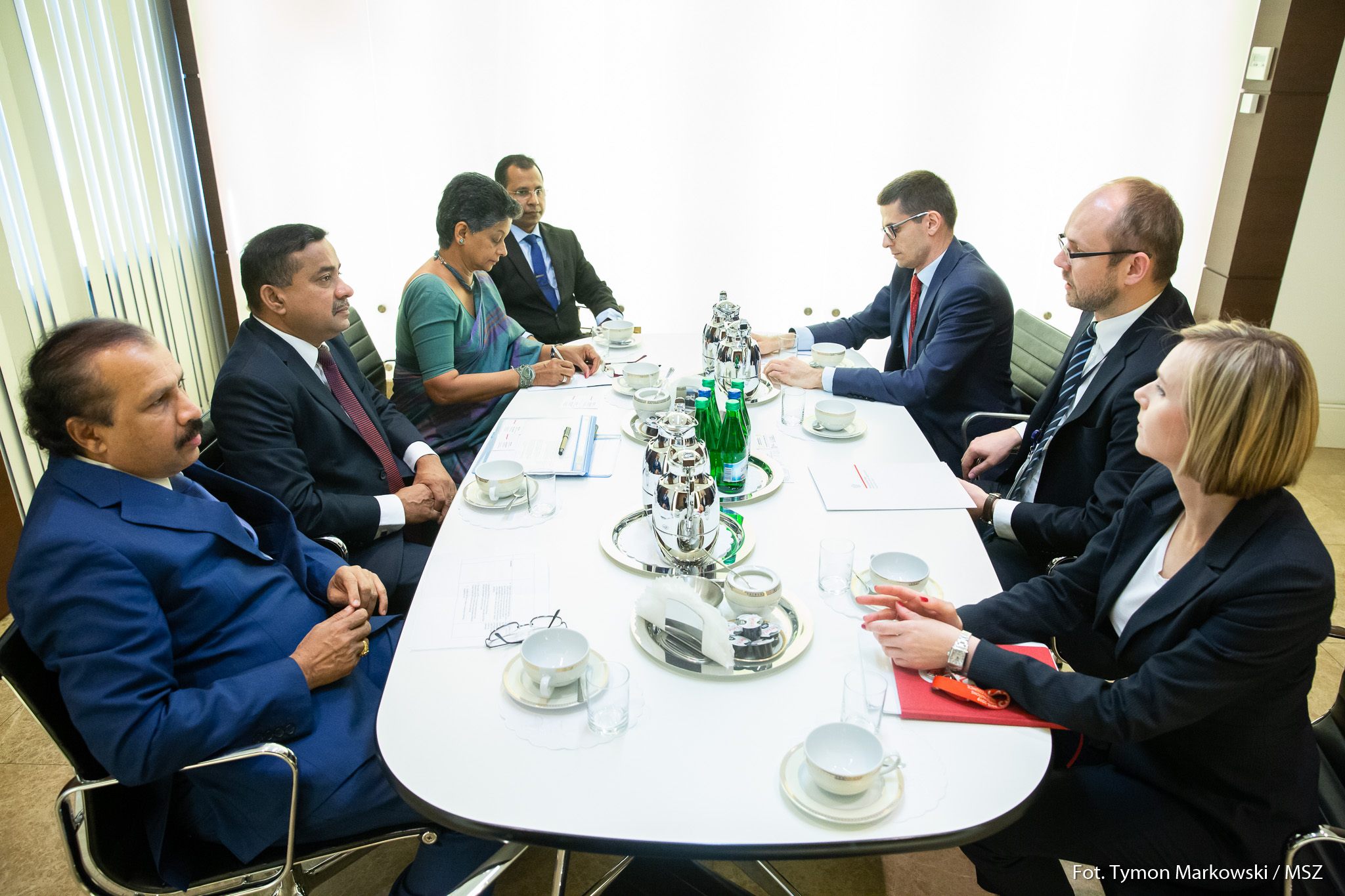