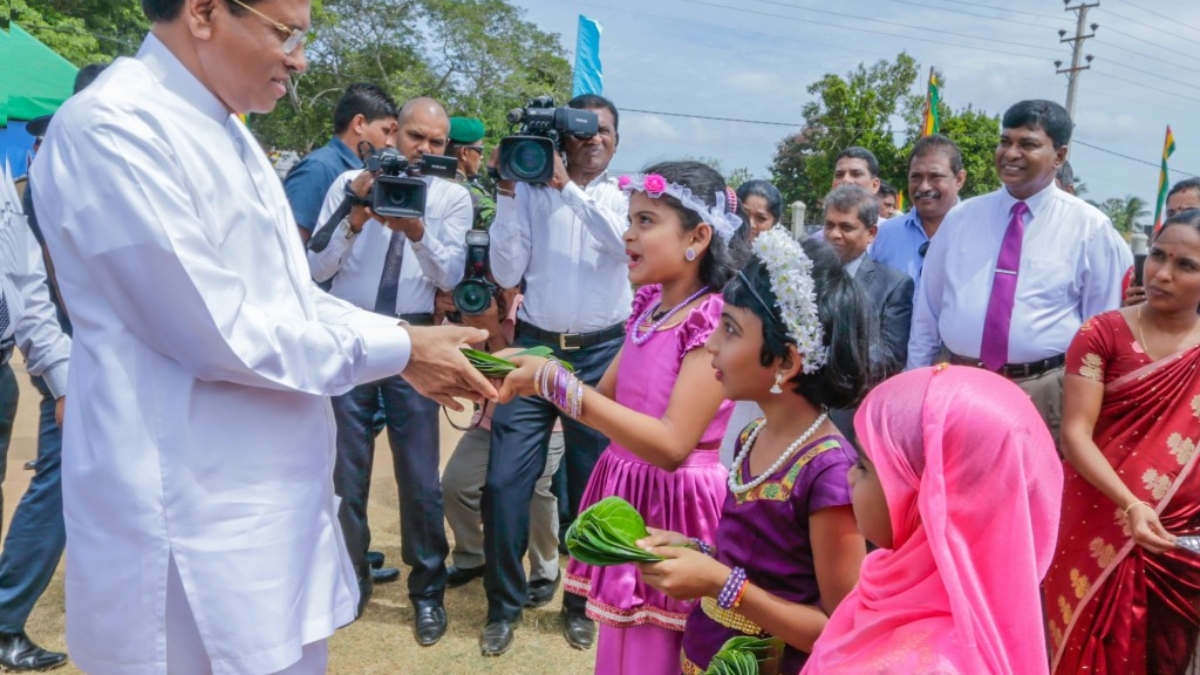 President Maithripala Sirisena says that the Government is paying close attention to save children from various menaces in society, and all the parties should support in this regard to the Government unconditionally.
The Daruwan Surakimu (Let’s Protect Children) National Programme is a prominent step towards that vision, the President said that adding the main objective of this programme is to build a prosperous future for the children while ensuring their safety, education and health.

He made these remarks addressing the kilinochchi district Summit of the ‘Let’s Protect Children’ National Programme held at the Kilinochchi Central College, today (18).

The ‘Let’s Protect Children’ National Programme was initiated as a project created by the President’s office based on a concept of President Maithripala Sirisena under the objective to protect the children and to create an environment for them to live safely in the society.

This programme is conducted Island wide under five sections such as preventing child abuse, ensure the protection of children, enhance of their good health, nutrition and welfare, personality development, develop their education and life skills.

For the first time in the history, this programme will be implemented as a special project jointly with 14 Ministries, 05 Departments, 06 Institutions, 09 Local Governments and civil and voluntary organizations. Rs 5232.6 million has been allocated for this three year plan from 2017 to 2019.

Scrutinize the standards, supervision and introduce policies for the administration of the voluntary Children’s Orphanages, changing the name of child custody centers to be a safe home, enforcement of the legal provisions necessary for domestic or international adoption of children in orphanages, registering and regulating of lodgings and pharmacies are among the initiative to be implemented under the national programme. A special purpose of this programme is to enforce the circulars issued so far, to send children, who are detained due to various legal issues, back to school.

Several projects are launched today within the Kilinochchi district under the ‘Let’s Protect Children’ National Programme.

Thus providing funds for the reconstruction and modernization of the children’s homes and accommodation of Northern province provided for the security of the children, providing monetary funds for special pathways and the development of other facilities of the disabled children who are being educated in 25 schools in northern province, to provide domestic water filters for 1000 families which doesn’t not have access for clean water in order to save them from threats of kidney diseases, provide sets of books, wooden equipment and sports items for selected pre-schools for pre child development, provide monetary aid for the families who have children living without security and other programs were conducted under President’s patronage today.

The President who addressed this event further stated that the National programme ‘Let’s Protect Children’ is special compared to projects that were conducted so far due to the fact that it is a project that is conducted actively and practically covering the whole Island and collaborating all parties.
Thus a mobile service for psychological counseling, legal advice, and accepting entries was conducted within the premises the occasion was held today.

Chief Minister of the Northern Province C.V. Vigneshwaran, Governor Reginald Cooray, Minister Chandrani Bandara, Deputy Minister Angajan Ramanathan, and Kadar Mastan and other political representatives of the province, and District Secretary and government officials were present in this event.

Thus the new stadium for the Kilinochchi Kanagapuram Maha Vidyalaya built simultaneously to the ‘Let’s Protect Children’ National programme was presented for the usage of the students by the President.

This stadium was built spending 5 million rupees after a request was made to President Sirisena by the students of that school when the President participated in the opening ceremony of Special Economic Zone at Kilinochchi on 14th of October 2017.

The President who came to the school was warmly welcomed by the students.

A special token of appreciation was also presented to the President.

120.89 acres of land used by the army officials in Jaffna, Kilinochchi, and Mullaitivu districts were released back to the people by President Sirisena on the sideline of the ‘Let’s Protect Children’ National programme of Kilinochchi district.