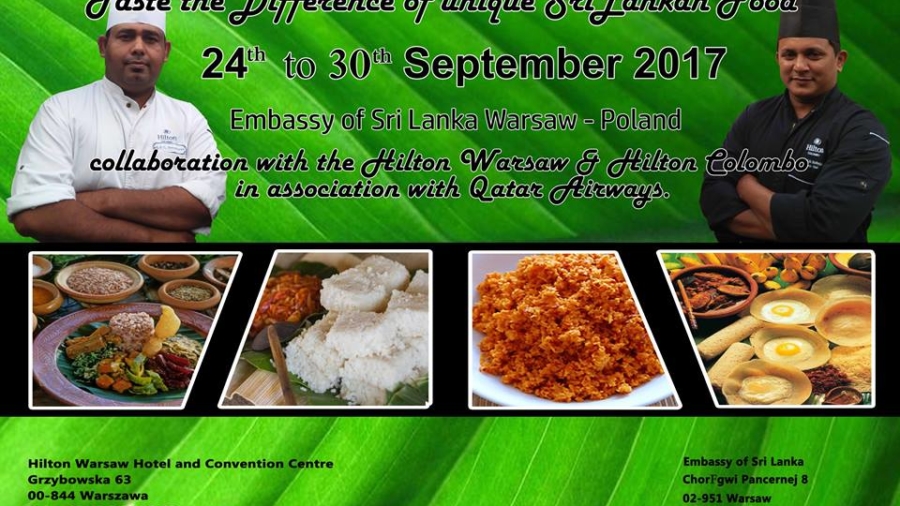 The colourful cultural programme began with traditional dances led by the members of the Pradeep Shastra Performing Art of Sri Lanka in Italy who performed splendidly to the melody of Sri Lankan drums and traditional music.

The festival commenced with a press luncheon at the MEZA Restaurant on September 24. Many guests were in attendance, including leading Polish press and VIPs. The luncheon officially opened the festival to the public and publicized Sri Lanka’s food festival in Poland. The unique culinary evening on September 26 was hosted by the Embassy of Sri Lanka. Over 100 guests were in attendance, including Polish Government officials, entrepreneurs, travel leaders and travel journalists

In organizing these events, the Embassy of Sri Lanka hoped to promote Sri Lankan food and culture to strengthen bilateral relations between Sri Lanka and Poland and present Sri Lanka as a key tourist destination for the Poles. In fact, in 2016, Polish tourist arrivals increased by approximately 20% as compared to the previous year due to tourism promotional initiatives. A significant increase in Polish tourists to Sri Lanka for 2017 is expected.

The Embassy of Sri Lanka in Warsaw is pleased to inform that First -Ever Sri Lankan Food Festival will be held from 24th September – to 30th September 2017 in collaboration with the Hilton Warsaw Hotel & Convention Centre (Meza Restaurant) and Hilton Colombo Hotel as well as in association with Qatar Airways.

Two experienced Sri Lankan chefs from the Colombo Hilton Hotel are scheduled to arrive in Warsaw specially to prepare authentic and traditional Sri Lankan cuisine for the festival, providing a chance for food lovers in Poland to taste traditional food from Sri Lanka.

This event will be held parallel to the 60th Anniversary of Sri Lanka and Poland diplomatic relations which falls this year 2017. A special evening at the Hilton Warsaw Hotel & Convention Centre will be held on 26th Sep., 2017 in presence special invitees especially, Hon. State Minister of Foreign Affairs of Sri Lanka and Polish VIPs as well as representatives of Polish and Sri Lankan travel trade, Polish media, business community, diplomats.

First ever “Sri Lanka Food Festival”, hosted by the Embassy of Sri Lanka in Poland will be a unique and momentous occasion for strengthening the bilateral relations between Sri Lanka and Poland as well as to present Sri Lanka as a key tourist destination for Poles.

During the event a selection of sophisticated dishes will be served specialties such as Crispy Golden Egg Hoppers, Fish White Curry and Chicken Kaju Malu. During the Sri Lanka Food Festival visitors to the restaurant can expect fine dining in sophisticated, historic surroundings, at a venue. A line up of top Sri Lankan chefs will be serving up a selection of dishes, demonstrating the diversity of Sri Lankan cooking and modern fusion cuisine. Everyone can enjoy authentic Sri Lankan culture at a unique and lively festival event. Visitors can enjoy authentic Sri Lankan Ceylon tea.

Visitors and honored guests attending the Sri Lanka Food festival can expect to have the opportunity to enjoy the traditional Sri Lankan buffet and discover heritage, natural beauty and rich culture of Sri Lanka.

Served food and drinks will be accompanied by the cultural part of the event Sri Lankan music and live cultural dance performance, a presentation of the Sri Lankan tourism and tea industry, will be a unique occasion introducing a slice of Sri Lanka to the heart of Warsaw.

The inaugural meeting to discuss the formation of Polish – Sri Lanka Chamber of Commerce was held at the Embassy of Sri Lanka in Warsaw on 8th August 2017.

The Embassy of Sri Lanka in Warsaw celebrated the 150th anniversary of Ceylon tea on July 6th with over 100 guests, including tea traders, travel writers, officials, academics and diplomats.

The event was held in collaboration with the Sri Lanka Tea Board and the Colombo Tea Traders’ Association under the direction of the Ministry of Foreign Affairs.

“The Global Ceylon Tea Party” commenced with lighting of the traditional oil lamp and a Sri Lankan cultural dance, a presentation on the Sri Lankan tea industry, followed by an address by Ambassador Tissa Wijeratne. In his speech, Ambassador Wijeratne underlined Sri Lanka as one of the topmost tea growers and exporters. In fact, the Sri Lankan tea industry has the highest marketing capacity and value-adding capacity amongst tea-producing countries of the world. Tea is now the unofficial national beverage in Poland. Sri Lanka has been a steady supplier of tea to the Polish market. Currently, Poland is Sri Lanka’s 4th largest tea buyer amongst the EU countries.

Guests who were present at the event learned about tea production and the preparation of a proper cup of Ceylon tea. They had the opportunity to taste various flavors of teas from different regions in Sri Lanka and were further delighted with tea punch, tea biscuits, sweets and traditional Sri Lankan food. The event was filled with aromas from tea samples on display while the music of popular Sri Lankan melodies played in the background.

The Embassy of Sri Lanka is pleased to inform that a Global Tea Party to celebrate 150 years of Ceylon tea will be held at the Embassy on 6th July, 2017 at 5.00pm

On 18th April 2017, Sri Lankan and Polish leaders have exchanged congratulatory messages on the occasion of the 60th anniversary of the establishment of their diplomatic relations between two countries.

The Sri Lanka Embassy in Warsaw, in collaboration with the University of Warsaw, held a ceremony on 6th June 2017 in light of this occasion. The event was attended by senior officials of the Foreign Ministry, diplomats, dignitaries, academics and students of the university.

Speakers shared views on the significance of the relationship between the two countries and highlighted collaborative efforts between Sri Lanka and Poland that have strengthened bilateral relations. The event put to focus that the lens of history and lessons from the past can set the tone and direction for crafting, deepening and expanding the relationship between the two countries.

To celebrate the 60th anniversary of the establishment of diplomatic relations between Republic of Poland and Democratic Socialist Republic of Sri Lanka, on 18 April 2017, Poland sent congratulatory messages.

On 6 June 2017 during the celebrations of 60th anniversary at the Warsaw University in Poland , the Deputy Minister of Foreign Affairs Mrs. Joanna Wronecka also congratulated the cooperation and expressed her hope for even tighter relations between Poland and Sri Lanka.

The President, the Prime Minister and the Minister of Foreign Affairs of the Democratic Socialist Republic of Sri Lanka addressed the congratulatory messages to their Polish counterparts- please find it here.

The latest update provided by the Disaster Management Centre related to flood situation in Sri Lanka: